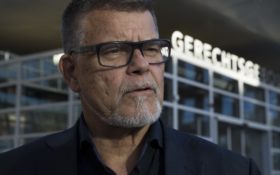 Self-styled positivity guru Emile Ratelband thinks age is just a number. And his is a number the Dutchman wants changed.

The 69-year-old TV personality has asked a court in the Netherlands to approve his request for a new birthday that officially would make him 49.

Ratelband says his legal appeal is consistent with other forms of personal transformation that are gaining acceptance and government recognition in the Netherlands and around the world.

“With this free(dom) of choice, choice of name, freeness of gender, I want to have my own age. I want to control myself,” he said Thursday.

“So when I ask for a mortgage, for example, they say it’s impossible,” he told The Associated Press. “If I go on Tinder, then I get women from 68, 69 when women are there.”

How about just being economical with the truth about his age?

Marjolein van den Brink, who specializes in human rights and gender issues at Utrecht University’s law school, said age discrimination is a problem but is different than the issues involved in reassigning gender.

“It’s quite clear that elderly people have a much smaller chance of getting a job than younger people,” she said. “But that’s just one element and it’s only something that happens to you once you reach the age of 40, 45, 50, depending a bit on your job.

“Whereas gender is something that follows you from birth to grave, and it determines nearly everything — and not just in the labor market but everywhere,” she said.

In rare cases, even race has also become more fluid.

In Britain, theater director Anthony Ekundayo Lennon has attracted attention in part because despite being the son of white Irish parents, he looks like a mixed-race man. He has also written and told journalists that he thinks of himself as black.

He says he was racially abused as a teenager because of his appearance, and when he started an acting career, he found it easier to pursue non-white parts. He also took an African middle name.

Now some black artists are complaining because Lennon was recently given a paid traineeship in a program designed to give more black people a chance for careers in the arts.

His case resembles in some ways that of Rachel Dolezal, a white woman in the United States who identified herself as black after she was raised by religious parents who had adopted four black children. She was working for the NAACP when her ruse was uncovered in 2015.

Ratelband, the Dutch TV personality, says the Dutch government could benefit if it were to accept his age demand. He said he’d be happy to forfeit his monthly pension of around 1,200 euros ($1,370) — a concession he estimates would save nearly 300,000 euros ($343,000) over the 20 years he wants shaved off his age.

The court in the central city of Arnhem is expected to issue a ruling in about four weeks.

Ratelband, who makes a living urging people and businesses to be positive, denies that the age request is a publicity stunt. He claims he is seeking a personal positive effect.

“Now I’m an old man. I have to save my money to give to my kids so that they can live,” said the father of seven. “But If I have that age again, I have hope again. I’m new again. The whole future is there for me again.”