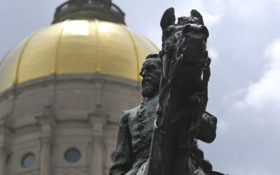 A man who says he was disgruntled with the Veterans Affairs system strapped fireworks to his chest and lit himself on fire in front of the Georgia Capitol on Tuesday.

The incident prompted the Capitol building to be evacuated and the surrounding streets to be shut down. No one else was injured.

“He had (fireworks) strapped to himself and as I understand doused himself with some additional flammable and set himself on fire,” said Mark Perry, Director of Public Information for the Georgia Department of Public Safety. “I’m not sure if it was gasoline or kerosene or what it was.”

Perry said the man’s condition wasn’t immediately known, though he was burned but could still speak to officers.

He was brought to Grady Memorial Hospital.

Perry said the man, whose identity was not immediately known, said he was a veteran.

“I’m not sure what his history is there, but he is disgruntled with the VA system and is trying to draw some attention to that. He stated something to the effect that he was looking for some help,” Perry said.

A Nissan Sentra possibly belonging to the man was still parked in front of the Capitol and was being investigated by a bomb squad unit.