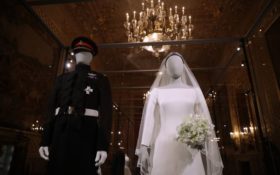 A Florida man stole an engagement ring and wedding bands from a girlfriend and used them to propose to another girlfriend, according to authorities.

Volusia County Sheriff’s deputies said Thursday they have issued an arrest warrant for Joseph Davis, 48, who had not been found as of Friday.

Their investigation started earlier this year when a woman from Orange City, Florida, told detectives she had discovered her boyfriend was actually engaged to someone else. When she looked up the fiancée’s Facebook page, she noticed a photo of her wearing a wedding band and engagement ring that was identical to her own from a prior marriage, the sheriff’s office said in a news release.

When the Orange City woman checked her jewelry box, she found her rings were missing, as were several other pieces of jewelry, including a diamond ring that belonged to her grandmother. The total value of the stolen property was about $6,270, according to the sheriff’s office.

Orange City is located halfway between Orlando and Daytona Beach.

The Orange City woman reached out to the fiancee, who returned some of the items, and they both called it off with Davis, who also went by the names “Joe Brown” and “Marcus Brown,” the sheriff’s office said.

The fiancee, who lives in Orlando, told detectives she had been duped too.

Davis once took the fiancee to a house that actually belonged to the Orange City woman, while she was at work, and claimed it was his. He then asked the fiancee to move in with him, but he then disappeared. By that time, the fiancee discovered her laptop computer and jewelry were missing, the sheriff’s office said.

Even though they did not have his real name, the jilted women remembered he had a relative in North Carolina and detectives were able to track down the relative who identified Davis, according to the sheriff’s office.

Davis has an active arrest warrant for a hit-and-run crash with injuries in Oregon, and previously has been arrested for possession of fictitious ID, filing a false police report, domestic assault and possession of cocaine with intent to sell, the sheriff’s office said.

According to the sheriff’s office, the jail where Davis previously was booked noted he had a tattoo on his left arm that said, “Only God can judge me.”