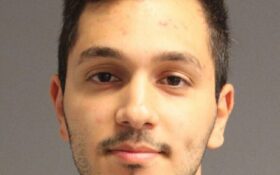 Less than two months after their office romance ended, Ahmad Kazzelbach began tampering with the email and social media accounts of the Baltimore woman who broke up with him. He changed her Instagram username to include the word “whore.”

That was only the start of a vicious cyberstalking campaign that would escalate steadily over the next year. Before FBI agents arrested her ex-boyfriend, the woman was wrongfully arrested twice and spent four nights in jail based on a string of false police reports that he made.

Kazzelbach, 27, of Pasadena, Maryland, was sentenced on Monday to four years in prison for his online harassment of the woman, who is identified by her initials “J.K.” in court records.

“He took the campaign to such an extreme extent that he used his considerable skill to alter and manipulate evidence and succeeded in weaponizing the criminal justice system against this person,” Bredar said. The judge departed from sentencing guidelines that called for a lighter prison sentence ranging from 30 to 37 months.

Kazzelbach’s ex-girlfriend told the judge that she was horrified that he could get her falsely arrested and jailed twice. She felt helpless behind bars.

“I couldn’t sleep and I was pretty much crying the whole time, being scared because he was using the law to harass me,” she said.

Kazzelbach, whose attorney requested a one-year prison sentence, apologized to his ex-girlfriend during the hearing.

“I hurt you, and I am deeply sorry,” he said. “You will never hear from or see me again.”

Court records provide a detailed account of how Kazzelbach used his computer skills to exploit cybersecurity systems and manipulate the courts to torment his victim.

Kazzelbach met the woman, now 28, when she began working as a health insurance broker for Bankers Life in Glen Burnie, Maryland, in June 2015. He was her training agent. They started dating and began sharing an apartment in December 2015.

The woman broke up with Kazzelbach in May 2016 after learning of his “alleged infidelity,” a court filing says. He moved out, but they continued to work at the same insurance company.

The harassment started in July 2016 when Kazzelbach created an email account that mimicked the woman’s real email address and used it to change her Apple account. He also changed the email address for her student loan account to the fake one.

The woman quickly realized somebody had changed the passwords to her Yahoo email and Instagram accounts. When she logged into her Facebook account, she saw the words “You took my boyfriend” had been added under her profile photo. She contacted the Anne Arundel County Police Department, believing Kazzelbach’s new girlfriend had infiltrated her accounts.

The next month, Kazzelbach accessed his ex-girlfriend’s online health insurance account and changed the entries for her race, pregnancy status and income. The income change disqualified her from a Medicaid plan in which she was enrolled.

He also used an office fax machine to send forged letters canceling the health insurance policies of two of his ex-girlfriend’s clients without any of their knowledge. Kazzelbach resigned when his employer confronted him about it.

Days later, Kazzelbach used “spoofing” computer software to make a text message to his ex-girlfriend appear to be coming from a Florida telephone number. The message warned her that “the last 3 months were just the beginning.”

“I have bigger plans for you,” it said. “I love how easily manipulated you can be.”

He followed through on that threat. He began filing petitions for protective orders by falsely accusing his ex-girlfriend of physically abusing and threatening him. To prop up his lies, he showed police “spoofed” text messages and calls that she never sent or made.

Kazzelbach ultimately made a total of 18 false police reports against the woman, resulting in at least six separate warrants for her arrest and two stints in jail in 2017.

In March 2017, an Anne Arundel County prosecutor investigating Kazzelbach’s complaints asked for permission to download his iPhone. He refused to consent to a full download. Instead, he began making false reports against his ex-girlfriend to police in Baltimore County.

When Baltimore County police detectives investigated Kazzelbach’s claims, they discovered that cellphone records didn’t support his story. FBI agents arrested Kazzelbach in January 2019. He told the agents that he started making false reports to Baltimore County police because he didn’t like the way Anne Arundel County authorities were “treating” him.

Kazzelbach was freed from custody before sentencing. He must report to prison by Oct. 27. The judge said he would recommend that Kazzelbach serve his sentence at a low-security prison in Danbury, Connecticut.