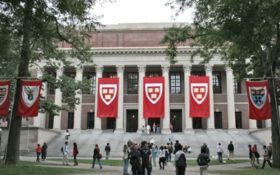 An Arizona man authorities say threatened to bomb Harvard University and shoot people who attended black commencement has been sentenced to more than a year in prison.

A federal judge in Boston sentenced 25-year-old Nicholas Zuckerman on Wednesday to a year and three months behind bars and three years of probation.

Prosecutors say Zuckerman posted comments on Harvard’s Instagram account in May 2017 encouraging “violence and death” if the event occurred.

He suggested using “two automatics with extendo clips” to kill people he referred to with a racial epithet. He then added bombing comments to other users’ responses.

Someone reported the posts to campus police, who referred the case to federal authorities.