Man fined... for yelling? (here's what happened) - The Horn News 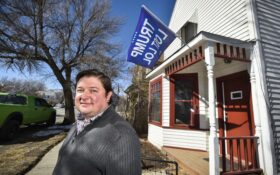 A Montana man cited for disorderly conduct for yelling at his neighbor this month in a dispute over political flags has pleaded guilty to a misdemeanor and was fined $100, the Independent Record reported.

Michael Challans of Helena said he apologized to his neighbor, Tim Mielke, before Monday’s hearing in Helena Municipal Court.

Challans, 43, used profanities and anti-gay slurs while yelling at Mielke as he arrived at his house on March 1. The minute-long encounter was captured on Mielke’s doorbell camera and he posted it to social media.

“I used the wrong words,” Challans said. “I feel horrible for what I said to him. Nobody deserves that.”

“It seems the issue is resolved and that is fantastic,” Mielke said Monday.

Mielke said earlier that in response to his neighbors’ continued flying of pro-Donald Trump and anti-Joe Biden flags four months after the election, he put up a flag that read: “TRUMP LOST LOL”

The doorbell video shows Mielke arriving at his house and a man across the street calling out to him to remove his flag and telling Mielke he moved into the wrong neighborhood.

“I don’t see how I could get a ticket,” Challans said on March 10. “How could anyone possibly get a ticket for using words?”

Since the story was reported, Challans said he has received threats on social media, including some to burn down his house.

“What is the difference of what I did to them and burning my house down to make me pay in some kind of way?” Challans asked a reporter before his hearing. “It’s an outrageous double standard.”