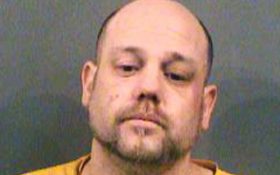 A Kansas man was convicted Wednesday of first-degree murder in the killing of a 3-year-old boy whose body was found encased in concrete in the laundry room of his home four months after his death.

Stephen Bodine, 41, of Wichita, was accused in the May 2017 death of Evan Brewer.

Prosecutors called dozens of witnesses and presented more than 550 pieces of evidence, including parts of the concrete tomb found in the rental home where the boy had lived with his mother, Miranda Miller, and Bodine.

Miller is also charged with murder in her son’s death.

Evan had been subject to a monthslong custody battle and authorities had been alerted at least six times that he was being abused .

Much of the evidence at trial came from a cache of 16,000 photos and video files shot by the couple’s home surveillance system, including images of Evan naked and chained up in the basement. In one video, Bodine and Miller are heard chastising Evan over the course of several hours, less than two months before he was killed.

Miller testified that Bodine had been punishing Evan for not eating on May 19, 2017, when he took the screaming boy into the bathroom. She said he soon came out with her son’s wet and lifeless body in his arms.

She said during a preliminary hearing that a few days later Bodine told her that he wanted “to take care of Evan before he started to smell.” She said he mixed up several bags of concrete and buried the boy’s body in that.

Evan was discovered entombed in the concrete in September, after Miller and Bodine had moved out of the property.

An autopsy couldn’t determine the cause and manner of Evan’s death because of the condition of his body when he was chipped out of the block of concrete. He did have Benadryl in his system, and Miller said she thinks Bodine sickened him in the days leading up to his death by force-feeding him large amounts of salt.