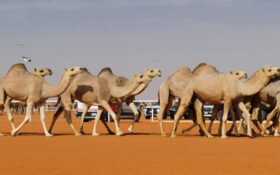 Emirati police have arrested a man for allegedly stealing a highly valuable newborn camel to give to his girlfriend for her birthday, the United Arab Emirates’ state-linked newspaper reported Wednesday.

The owners of the baby camel reported the theft from their farm earlier this month, according to the local National newspaper, prompting Dubai police to fruitlessly search the area. Several days later, an Emirati man called authorities to say a stray camel had wandered onto his farm some 3 kilometers (almost 2 miles) away.

When interrogated, the man’s story fell apart, according to police in Dubai. He soon admitted to trespassing on his neighbor’s farm to steal a rare breed of camel for his girlfriend, the report said, settling for the newborn after failing to wrangle an adult. The man reported the stray beast when he grew worried about being caught, the paper said.

The police returned the camel to its owners and arrested the suspect and his girlfriend on charges of theft and making a false statement, the National said.

The days are long gone when camels were an essential part of life in Dubai, now a futuristic skyscraper-studded city on the Persian Gulf. But some continue to raise camels for food and milk. Camel racing remains a cherished pastime in the federation of seven desert sheikhdoms and the occasional camel beauty pageant even draws traders willing to pay millions of dollars for the most prized breeds.