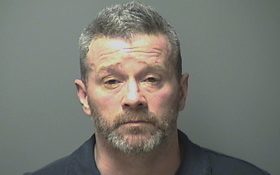 A man has been accused of grabbing a 2 1/2-foot-long (76 centimeters) sword and chasing after another man who asked him to turn down his music, police in Manchester, New Hampshire, said.

A man knocked on the door of Benjamin Layland, 47, on Monday, police said. Layland reportedly became upset and grabbed the sword. He allegedly chased the man down a hall, police said. The man got away and there were no injuries.

Layland was charged with criminal threatening. He was scheduled to be arraigned Tuesday. It wasn’t immediately known if he had a lawyer who could speak on his behalf.