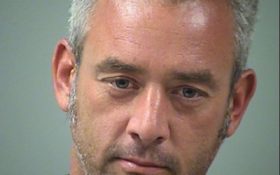 The man accused of swiping a shark from a Texas aquarium says he did so because he was concerned about the sea creature’s wellbeing.

Anthony Shannon is charged with felony theft for stealing the horn shark Saturday from the San Antonio Aquarium. The heist, which was captured on surveillance video , shows a man grabbing the 16-inch-long (40-centimeter-long) shark from a petting tank and later wheeling it away in a baby stroller. The shark, named Miss Helen, was recovered Monday night from Shannon’s home.

“I’m an activist, not a criminal,” Shannon told San Antonio TV station KENS in an interview from his home, which has three saltwater tanks filled with dozens of fish and five sharks.

Shannon said he’s a lifelong marine enthusiast and that he became concerned about conditions at the aquarium after a friend told him that marine animals were dying frequently. About a month ago, Shannon posed as a salt distributor so he could investigate conditions and take water samples from the tanks, he said.\

The aquarium said in a statement that employees had no reason to doubt that Shannon was a salt distributor until after the theft, when a worker recognized him.

“We do daily tests of our water throughout the aquarium and show that everything is within normal parameters on the day Helen went missing,” the aquarium said in a statement.

Shannon said he took the shark from the petting tank after he saw a guest squeeze it.

“It’s regretful to do something like that, but if it’s an emergency for an animal, then no, it’s not,” Shannon said.

The aquarium said its animals are well cared for and that Miss Helen is on the mend after the caper.

“We appreciate all of the love and support everyone has shown for Helen and invite everyone to come see her when she’s back on exhibit,” the statement said.