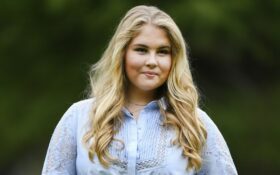 The Overijssel District Court convicted the 32-year-old man of sending threats via Instagram to the 16-year-old heir to the Dutch throne and one of her friends.

“He threatened her with rape and threatened both of them with death,” said Ronald van Vuure, a judge at the court authorized to speak to the media.

“The court concluded that he developed a very unhealthy obsession with the Royal House and in particular Princess Amalia,” Van Vuure added in a statement posted on the court’s website.

The defendant was detained by military police outside the royal family’s former home in 2017 and said at the time that he had a date with Amalia, whose official title is Princess of Orange, the court said.

The man’s identity was not released, in line with Dutch privacy rules.