Man booked on animal cruelty after beheading... - The Horn News 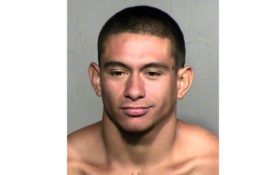 An Arizona man has been arrested on suspicion of mutilating and beheading his roommate’s dog as she moved out of the home that the two shared in a Phoenix suburb.

Jose Vega Meza, 21, told investigators that he killed the dog on Saturday because his roommate owed rent money to his mother, who owns the home in the city of Buckeye, police said.

The man’s roommate told police she lost track of her dog as she moved out her belongings and saw Vega Meza trying to sneak a box onto her truck.

The roommate opened the box to discover the headless dog inside.

Police could not immediately provide information about the dog’s breed but said it was small.

She was so distraught that she was unable to call authorities until the next day.

Vega Meza told investigators that he killed other animals around his neighborhood, including a cat he said he drowned, police said in court documents.

He was booked on suspicion of animal cruelty stemming from the killing of the dog on Saturday.

Vega Meza was also booked for misdemeanor assault for attacking another inmate after he was booked in jail, investigators said.

Court records did not list a lawyer who could comment on behalf of Vega Meza, who was still jailed Monday for lack of $20,000 bond. Efforts to find a phone number listed for him were unsuccessful.