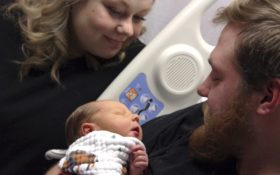 A Minnesota man awoke from a medically-induced coma just in time for the birth of his son after his wife, at 39 weeks pregnant, saved him from cardiac arrest.

Ashley Goette says she awoke Oct. 16 to hear her husband, Andrew Goette, gasping for air in their West St. Paul home. She called 911 and a dispatcher guided her through administering CPR. First responders arrived and rushed Andrew to United Hospital in St. Paul, where he was placed in a coma to minimize possible brain damage.

Doctors told Ashley it wasn’t clear if her husband would survive or if he would suffer brain damage. Ashley told her husband she wouldn’t have the baby until he awoke, and he did several days later, neurologically intact and in time for the birth of their first child, Lennon.

Although Andrew couldn’t be wheeled into the room to be at his wife’s side during the Caesarean section, her sister streamed the birth to him on FaceTime so he could watch it from outside the door.