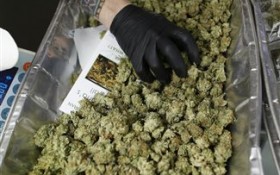 A man who may have been dreaming of a “green” Christmas found himself inside the gray walls of a Tennessee jail.

Officers and a K-9 smelled a strong odor of marijuana coming from three bags, according to the documents. The officers said they saw Temmeraj pick up the bags and load them onto a cart.

Temmeraj allowed officers to search the bags, which were filled with what appeared to be wrapped Christmas gifts. The items were actually filled with vacuum-sealed bags of marijuana weighing 84 pounds (38 kilograms), authorities said.

Temmeraj had flown to Nashville from Seattle, the documents state. He was booked into jail and bonded out Tuesday morning, according to online records. It’s unclear whether he had an attorney who could comment on his behalf.