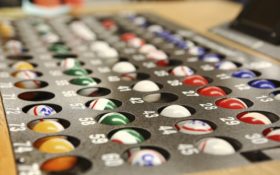 The luck has ran out for a Louisiana man allegedly caught rigging bingo games to win more than $10,000.

John Cook, 43, was booked into the Ouachita Correctional Facility on a felony theft charge and two counts for failing to appear multiple times following his June 29 arrest, according to a Monroe Police warrant obtained by news outlets.

Police say Cook was recorded on video at a bingo parlor manipulating a “Bonanza Bingo” game by handpicking the balls he wanted to play and then hiding the winner until he was ready to end the game. The warrant says Cook did this four times and won thousands for three people, including his sister.

One of the winners was captured speaking with Cook before the drawing, and two winners were seen giving Cook money after the game, the warrant states.