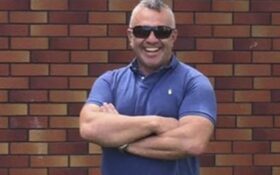 London police arrested a man Friday on suspicion of murdering an officer inside a police station nearly two months ago.

Sgt. Matiu Ratana, 54, was shot at Croydon Custody Center in south London in the early hours of Sept. 25 by a handcuffed suspect. Ratana, a hugely popular officer, was taken to hospital but later died from his wounds.

The 23-year-old suspect, who had been arrested for separate offences, then appeared to have turned the gun on himself.

“You are aware a person was arrested for other offenses before that, and after Matt was killed that person went to hospital,” Metropolitan Police Commissioner Cressida Dick said. “They have been very unwell but their condition has now stabilized and improved sufficiently for us to be able to arrest him for murder today.”

The man remains hospitalized and officers will liaise with medical and legal teams in assessing when he will be fit to be questioned, police said.

“He was a great officer with wonderful qualities and so many people have been impacted by his loss and will miss him a lot,” she said. “The investigation is moving on into a dreadful, dreadful homicide.”

It is rare for police officers to be shot and killed in the U.K., which has strict firearms laws. The officer is the 17th from the London force to be killed by a firearm since 1945.

Before Ratana, the last London police officer killed in the line of duty was Constable Keith Palmer, who was stabbed to death in March 2017 during a vehicle and knife attack outside Parliament.