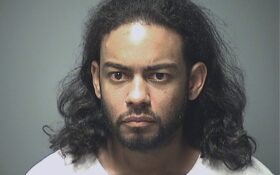 A New Hampshire man has been accused of kidnapping a Manchester man at knife point and leaving him naked and tied to a tree.

The incident began Friday night when Betances allegedly went to an apartment looking for Christopher Upham. Betances allegedly forced Upham at knife point into a car and then drove him around to several locations hoping to get money he claimed the 45-year-old Upham owed him.

Unable to get any money, Betances drove Upham to Derry where he was ordered out of the car. He was taken behind a building and ordered to remove his clothes, police said. Betances and another unidentified man bound Upham’s wrists and feet, tied him to a tree and poured bleach on him, police said. Betances then alleged cut Upham twice in the chest with a knife before walking away.

Upham was able to free himself several minutes later. He contacted Derry police and was transported to a local hospital.

Betances was ordered Monday to remain in preventive detention, based on evidence that his release could endanger Upham. Dupuis was released on $2,500 bail and is scheduled to appear in court July 30.

It was not immediately known if they are being represented by attorneys. A phone number could not be found for either of them.

Manchester police said Monday that the investigation is ongoing.