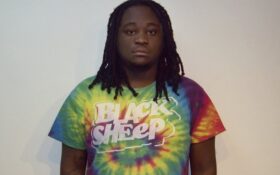 A man has been accused of firing gunshots at a gathering of President Donald Trump’s supporters along a road in South Carolina.

There were no injuries, police said.

Marquise Damarius Asomani, of Charlotte, North Carolina, was arrested after police responded to a report of shots fired Monday evening in Fort Mill, the Fort Mill Police Department said in a statement Tuesday.

About 30 people had gathered and were waving American flags and holding up “Trump” signs, said Sgt. Bill Rhyne with the South Carolina Highway Patrol.

On the same day, Trump had made a brief stop at an airport in Greer, about 90 miles (140 kilometers) west of Fort Mill, after addressing the Republican National Convention in Charlotte, North Carolina.

When police arrived Monday, witnesses told them that three men had driven by them multiple times while making “derogatory remarks and yelling obscenities at them” from their car, according to the statement.

They also said the driver of the car then extended his arm through the car window while “holding what appeared to be a handgun,” Zachary said. That’s when witnesses say they heard the gunshots.

Officials did not say if the gunshots were fired at the Trump supporters or towards another area.

Rhyne said the gunshots came from a red Volkswagen Jetta that then drove off down a highway. A South Carolina Highway Patrol trooper who had just approached the area tried to catch up with the vehicle, he added.

The trooper lost sight of the car after it exited the highway. It was later found by law enforcement officers abandoned behind a closed business in Fort Mill, Rhyne said.

Authorities then stopped a white Chevrolet with four occupants that was leaving that area and identified three people suspected of involvement. Two were released without charges, Major Bryan Zachary of the Fort Mill Police Department said. Asomani, 23, was taken into custody from that group and charged with multiple charges including six counts of assault, and battery of a high and aggravated nature. His bond was set at $75,000.

It was not immediately clear if he had an attorney who could comment.