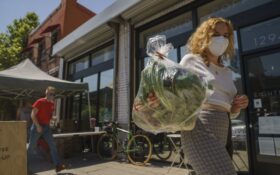 Gov. Gavin Newsom on Tuesday signaled an end to more than a year of closures in California, announcing that the nation’s most populated state plans to lift most coronavirus restrictions on businesses and workplaces June 15, when enough people should be vaccinated to start returning to normal.

A statewide mask mandate will stay in effect, Newsom said, and he cautioned that California will reopen more widely in mid-June only if vaccine supply is sufficient and hospitalization rates stay stable and low.

Still, the Democratic governor, who has overseen some of the most restrictive pandemic rules in the country, said it was time to forge ahead because the state’s infection rate is among the lowest in the U.S. and 20 million vaccines have been administered so far.

“We can confidently say by June 15 that we can start to open up as business as usual, subject to ongoing mask-wearing and ongoing vigilance,” Newsom said. “So this is a big day.”

The announcement comes as states nationwide have lifted health restrictions and mask mandates as more people get vaccinated, despite rising infection rates in some places and concerns of another surge.

California has had some of the nation’s strictest pandemic rules, becoming the first to institute a statewide stay-at-home order last spring and adopting a complex color-coded tier system in August that dictated which businesses could open and at what capacity depending on how widespread the virus was in a county.

The pandemic has taken its toll on California, with more than 58,000 people dead, businesses closed and students who have been out of classrooms for much of the year.

Now, the new plan says businesses can open with “common-sense risk reduction measures” such as wearing masks and encouraging vaccinations. Most capacity limits for businesses and recreational activities will be lifted, although larger indoor events, such as conventions, will be allowed only with testing or vaccination verification requirements, Health and Human Services Secretary Dr. Mark Ghaly said. Other modifications may be needed.

The move toward a June 15 reopening comes with far fewer and must-hit metrics than Newsom’s prior announcements about reopening. While the color-coded system is based on detailed metrics for assessing risk, daily monitoring of infection rates and detailed calculations for capacity, the new plan has none of that.

Despite the caveat that California would only lift the restrictions based on hospitalization and vaccination rates, officials could not say how they would assess that or what would constitute a good trajectory. Both Newsom and Ghaly struggled at times Tuesday to explain the changes without adding caveats.

Vaccine supply must be “sufficient for Californians 16 years and older who wish to be inoculated” though state officials declined to give a must-hit number of shots. Hospitalization rates must be “stable and low,” but officials didn’t say what exactly that means.

Dr. Monica Gandhi, infectious disease expert and professor of medicine at University of California, San Francisco, believes California can begin reopening because many residents were exposed to the virus during the winter surge and many others are getting vaccinated.

“He wouldn’t have been able to keep it closed past June 15 anyway, because the cases would have been so low,” she said.

The announcement comes as the first-term Democrat faces a likely recall election pushed by critics of his handling of the pandemic.

Kevin Faulconer, a former San Diego mayor and Republican who is hoping to replace Newsom, said in a statement that “it took millions of Californians signing a recall petition for him to finally begin reopening our state.”

Newsom said he expects 30 million doses of vaccine to be administered by the end of April, putting the state on track to at least partially inoculate most of the estimated 32 million people 16 and up who will be eligible for the vaccine starting next week. Roughly 7.5 million residents are fully vaccinated, and 6 million are partially inoculated.

Bernadette Boden-Albala, dean of the public health program at the University of California, Irvine, said the governor sent a hopeful message but she worries that younger people won’t get vaccinated in the numbers needed to fully reopen and protect children from the virus.

“The population of 16-plus, among that population are those that defied all guidance and went to places like South Beach in Miami in crowds,” she said. “We needed a good message, but the message may be too soon.”

Michael Rodriguez, owner and general manager of the Cadillac Bar & Grill in San Francisco’s empty downtown, can’t wait for the tech employees at Twitter and Square to return for happy hour cocktails and for theaters to reopen to live audiences.

“Everybody has something to look forward to now,” he said.

As of Tuesday, only Inyo and Merced counties remain in California’s most restrictive purple tier, while 16 other counties moved into less-restrictive tiers, including San Diego. The state also hit its goal of administering 4 million doses to people in the ZIP codes hardest hit by the pandemic, further loosening metrics for moving between tiers.

State officials said the two-month notice should give people enough time to schedule their first dose, wait the recommended three to four weeks for a second shot and get through the two-week period for the vaccines to fully kick in.