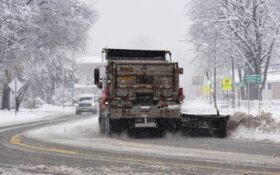 The National Weather Service forecast up to 4 feet (1.2 meters) of snow or more through Sunday that “may paralyze” the hardest-hit communities, including Buffalo, with periods of near-zero visibility.

Hochul’s state of emergency covers 11 counties, with commercial truck traffic banned from a stretch of Interstate 90 southwest of Buffalo after 4 p.m. Thursday.

The snowfall was expected to be at its greatest intensity between 7 p.m. Thursday and 7 p.m. Friday.

The weather service also warned of accumulations of 2 feet (0.6 meters) or more of lake-effect snow in parts of northern Michigan through Sunday.