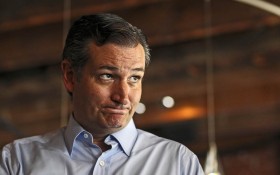 The Ted Cruz campaign is reeling today after a report surfaced claiming he may have had at least five extramarital affairs — including with a worker on a rival campaign.

The story, if it proves true, could be the kiss of death for Cruz’s political ambitions.

The National Enquirer has broken the story in its latest issue, in which it includes identities and photos of the women who allegedly had relationships with Cruz.

The fact that the story originated with the Enquirer has generated a healthy level of skepticism — but it was the Enquirer that also initially broke an affair scandal that sunk former presidential candidate John Edwards.

And Washington Times columnist Drew Johnson on Twitter today claimed that he could confirm that at least two of the women named by the Enquirer were accurate. The Washington Times had also reportedly looked into the story.

COMING CLEAN: From what I know, at least 2 of the women named as Cruz mistresses by the National Enquirer are accurate #TRUMP #CRUZ #TCOT

The story of Cruz’s alleged affairs took social media by storm today, with #CruzSexScandal trending on Twitter and generating millions of tweets and Internet memes.

The scandal is also raising fresh questions about a mysterious $500,000 that a pro-Cruz political action committee donated to business executive Carly Fiorina’s campaign last year. One of the women named in the Enquirer report is Sarah Isgur Flores, a veteran GOP insider and former campaign manager for Fiorina, leading to speculation that the donation may have been hush money.

If the allegations of extramarital affairs prove true, it could spell the end of Cruz’s campaign and the squeaky-clean family-man image he’s worked hard to portray. It would also hand the Republican presidential nomination to billionaire Donald Trump.

The allegations alone may be enough to destroy Cruz. And given that Trump and Cruz have been engaging this week in a war of words over each other’s wives, some are seeing Trump’s fingerprints all over this latest story.

In fact, Johnson hinted that Trump may have been sitting on this story for weeks. Johnson predicted nearly two weeks ago that Trump was going to drop a sex scandal bombshell on Cruz.

SCANDAL: Within 24 hrs of #Rubio dropping out, #Trump (who had at least 2 affairs) will leak info about a #Cruz extramarital affair #tcot

This is a rapidly developing story. Please check back for updates, including reaction from the Cruz campaign as it becomes available.