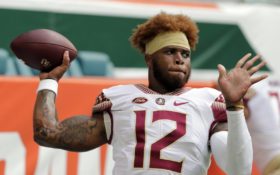 Florida State’s head football coach announced Sunday that quarterback Deondre Francois had been dismissed from the team after allegations of domestic abuse surfaced.

FSU head coach Willie Taggart said in a statement Sunday that he had notified Francois of his decision the night before. Taggart’s decision to drop Francois came the same day the quarterback’s girlfriend posted a video to Instagram alleging abuse by Francois.

“As we build a new culture and foundation for FSU football, we have high expectations for all of our student-athletes and we will not shy away from those high standards of conduct,” Taggart said. “We are moving forward as a program.”

The Tallahassee Democrat reports that the video shows neither Francois nor the girlfriend, but a woman can be heard begging a man to stop hitting her.

Francois hasn’t been charged with a crime. He couldn’t be reached and Francois’ uncle, Pat Julmiste, didn’t respond to a phone call seeking comment.

Only last month, Francois announced he would return to Florida State for his senior season in 2019.