Major city prepared to put a ban on brews? - The Horn News 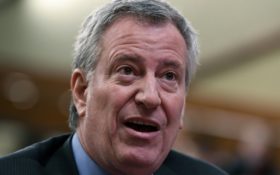 Existing ads will also be allowed to remain until their contracts end.

The health commissioner, Dr. Oxiris Barbot (OHK’-see-rees bahr-BOH’), says there are “far too many deaths related to alcohol.”

The deputy mayor for health and human services, Dr. Herminia Palacio, says ads can influence how much people drink and how young they are when they start.