Major city is first to make calls from jail free (WHAT!?) - The Horn News 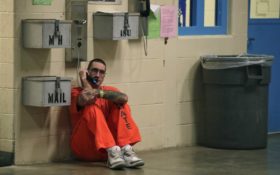 The Democratic mayor said the city has fully implemented the law passed by the City Council last August.

“For too long have people in custody faced barriers to basic aspects of everyday life,” de Blasio said. “With free phone calls, we’re eliminating one of those barriers and ensuring that people in custody have the opportunity to remain connected to their lawyers, families and support networks that are so crucial to re-entry into one’s community.”

Inmates were previously charged 50 cents for the first minute of a phone call and 5 cents per additional minute. The majority of people in the city’s jails are awaiting trial and have not been convicted of a crime.

Under the new rules, inmates can make free calls totaling 21 minutes every three hours to anywhere in the United States. The city Department of Correction is installing additional phone lines to handle the expected increased volume of calls.

The correction officers’ union voiced concerns about the new policy in the past, saying that free phone calls could aid gangs that operate from inside the jails. Elias Husamudeen, president of the Correction Officers Benevolent Association, said Wednesday that the union’s main concern is ensuring that no criminal activity is taking place in the jails.

“Our gang intelligence is at the front lines of this area and nobody does it better than them,” he said.

Lawmakers in Connecticut are considering a bill to provide free calling for inmates in the state’s prison system. Connecticut would be to first state to make prison calls free if the measure goes into effect, according to Wanda Bertram, a spokeswoman for the Massachusetts-based Prison Policy Initiative, which studies the issue of inmate phone calls.