Major change could be coming to election ballots... - The Horn News 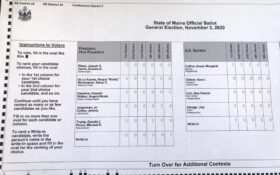 An electoral reform that has taken root in the iconoclastic states of Maine and Alaska could be gaining traction nationwide.

Ranked-choice voting, a concept that was relegated to theoretical discussions among policy wonks for decades, is now being promoted by advocates in other states, building on last year’s successful initiative campaign in Alaska.

A major push is under way in Wisconsin to enact similar reforms. New legislation in Virginia allows towns and cities to employ the concept beginning this year. Utah’s legislature passed similar legislation this month that awaits the governor’s signature. And in New York City, the Democratic mayoral primary to succeed term-limited Bill DeBlasio is using ranked-choice voting for the first time.

Similar efforts could get a huge boost if the federal voting-rights legislation House Democrats approved survives Republican opposition in the Senate. It includes a provision requiring all voting equipment be able to accommodate ranked-choice voting, and mandates congressional study of the concept.

Virginia Democratic Rep. Don Beyer has been pushing the idea for more than five years. He said one of the biggest obstacles is a lack of familiarity that leads people to believe it’s more complicated than it really is.

“It passes the nod test,” Beyer said in an interview. “If you take two or three minutes to explain it, it makes sense, and you get that nod of recognition.”

Fundamentally, ranked-choice voting works like this: Instead of voting for a single candidate, a voter ranks all of the candidates for a given office, from first to last. If one candidate gets a majority of the first choices, that candidate wins. If not, the last-place candidate is eliminated, and the votes that went to that candidate are now reallocated to the second choices of those voters. The process is repeated until a candidate has a majority.

Maine voters approved ranked voting in federal races in a referendum in 2016, and it was used for the presidential election for the first time in 2020.

Alaska voters took the concept a step further, approving a variant called Final Four balloting: The top four finishers in a non-partisan primary advance to a general election that will be determined by rank-choice voting. The reforms weaken the hold that voters on either end of the ideological spectrum have on the process, and could help moderate Republican Sen. Lisa Murkowski, who’s up for re-election in 2022.

In a closed primary, pro-Trump Republicans could knock her out for her vote to convict former President Donald Trump at his impeachment trial. In a non-partisan primary, she can attract support from moderates in both parties to make the final four.

While ranked-choice voting can be a boon to moderates and independents, it also is a lifeline to third-party candidates. Under the current system, voters are reluctant to cast ballots for a third-party candidate on the theory that their vote would be wasted. In a ranked-choice system, if your first choice finishes at the bottom, your second choice can still be counted.

Opposition to ranked-choice voting reform has come primarily from the major political parties, said Jeremy Mayer, a political science professor at George Mason University who has studied the issue.

“It weakens them as sources of power,” Mayer said.

But in Virginia at least, Republicans appear to be on board with the concept for their own nomination process. State GOP officials have argued for months over how they will nominate a gubernatorial candidate this year, but one guiding principle has been an insistence on ranked-choice voting to ensure that, in a crowded field, a candidate won’t be declared a winner without majority support.

Voters also are increasingly receptive. Mayer said the reforms promote civility because candidates won’t want to alienate voters who might be willing to make them their second choice.

Opposition also comes from interest groups that can manipulate each parties’ primary process to their advantage, said Katherine Gehl, founder of the Institute for Political Innovation. Her group advocates for reforms similar to those enacted in Alaska, though it recommends a Final Five system over a Final Four.

The primary benefit from ranked choice voting reforms isn’t necessarily a change in who gets elected, but rather the freedom it provides those who are elected to act beyond narrow political interests, Gehl said.

“We are less concerned about who wins, but very focused on changing what winners have freedom to do and what they are incented to do,” Gehl said.

Rob Richie, president and CEO of FairVote, which has been advocating for ranked-choice voting for nearly 30 years, said momentum for the concept is gaining, and voting systems are overcoming technological issues that had been a barrier in the past.

“The logistics are getting easier,” he said.

“If you’re a Republican in Alexandria, you’ve got to feel unrepresented,” he said.