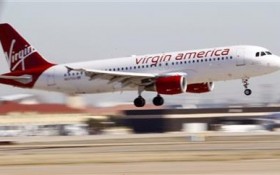 Alaska Air Group Inc. is buying Virgin America in a deal worth more than $2 billion, combining their West Coast presence and reigniting the debate over airline consolidation.

Alaska Airlines will pay $57 in cash per Virgin America share. That’s a 47 percent premium to its Friday closing price of $38.90. Virgin’s shares rose more than 39 percent in premarket trading.

The companies put the transaction’s value at about $4 billion, including debt and capitalized aircraft operating leases.

Virgin America got off the ground with support from minority owner Richard Branson and began flying in 2007. It went public in November 2014 with an initial stock offering priced at $23 per share. Virgin, which turned profitable — barely — in 2013, earned a record $340.5 million last year. The airline’s profits came from slowing down its rapid growth and from the help of low fuel prices. Virgin was going to be forced to restart that growth this year as it took delivery of new jets. New routes often start at a loss.

Alaska Airlines said Monday that the deal will expand its route network to include 1,200 daily departures. The airline is currently the sixth-largest U.S. carrier by traffic and serves 90 destinations in the U.S., Canada and Mexico. This deal gives them a bigger presence in San Francisco and Los Angeles, two coveted gates at Dallas Love Field, and more transcontinental service. The transaction also gives Alaska more access to some East Coast airports such as Ronald Reagan Washington National Airport and John F. Kennedy International Airport and LaGuardia Airport in New York.

The combined business, which will be based in Seattle, will have about 280 aircraft including regional planes. Alaska has been a loyal Boeing customer for years, flying almost entirely a fleet of 737s, manufactured just a few miles from its headquarters. Virgin only uses Airbus jets.

The deal marks a shift in the size of consolidations within the airline industry. For more than a decade consolidation swept through the major players, reducing the largest nine carriers in 2005 to four airlines by the end of 2013. The Alaska Air buyout of Virgin America indicates that consolidation has shifted to smaller players.

Virgin America got off the ground with support from minority owner Richard Branson and began flying in 2007. It went public in 2014 and while it has experienced growth in Dallas and added new service to Hawaii and Denver, the airline was having trouble getting enough takeoff and landing slots at busy New York airports. Its limited size and schedule made it difficult for the company to compete with bigger carriers for lucrative business travelers.

The deal is anticipated to add to adjusted earnings per share in the first full year, excluding integration costs, and boost annual revenues 27 percent to more than $7 billion. Alaska Air said that it expects about $300 million to $350 million in one-time integration costs.

The combined company will be led by Alaska Air CEO Brad Tilden.

Both companies’ boards have approved the transaction, which is expected to close no later than Jan. 1, 2017. It still needs approval from Virgin America shareholders.