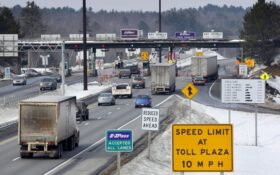 A man in Norway discovered a Maine Department of Transportation hard hat more than 3,300 miles (5,310 kilometers) away from its home.

Sigbjørn Eide said he was collecting trash earlier this month along Norway’s coast when he came across the white hard hat buried in seaweed. Eide spotted an American flag and a MaineDOT logo on the hard hat, The Boston Globe reported Tuesday.

When he got home later that day, Eide said he found out the hat belonged to the Maine Department of Transportation and reached out to the department through social media.

Edie told MaineDOT on Feb. 8 that he “was astonished and impressed about the long voyage the small helmet had taken,” the newspaper reported.

On Tuesday, MaineDOT posted on Facebook that Eide had found the hat miles away from Maine.

“Sigbjørn was on a walk and found a MaineDOT hard hat in a fjord, about 3,300 miles from MaineDOT headquarters,” the department said. “We’re not quite sure how this happened, but we’re glad we have a new pen pal!”

A MaineDOT spokesperson said the department won’t ask Eide to return the hat and is planning to send him some items from the state.