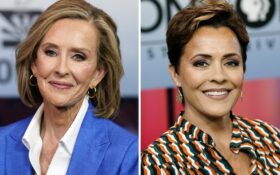 Now he’s hoping for a repeat in his own backyard.

Ducey is part of a burgeoning effort among establishment Republicans to lift up little-known housing developer Karrin Taylor Robson against former television news anchor Kari Lake, who is backed by Trump. Other prominent Republicans, including former New Jersey Gov. Chris Christie, have also lined up behind Robson in recent days.

On Monday, Robson’s campaign announced the endorsement of former Vice President Mike Pence, who will campaign with her on Friday — the same day Trump is scheduled to hold a rally for Lake, creating a split-screen moment underscoring the divide between the GOP establishment and Trump.

The push for Robson is reminiscent of how many leading Republicans rallied around Georgia Gov. Brian Kemp in the final stretch of his ultimately successful bid to fend off a Trump-endorsed primary challenger.

Few states have been as central to Trump’s election grievances as Georgia and Arizona, the two closest 2020 battlegrounds where he pushed aggressively to overturn the results and fumed when Kemp and Ducey refused to go along. Trump has already faced a setback in Georgia, and the Aug. 2 race in Arizona is among his last opportunities to settle scores and install allies to lead states that may prove decisive if he decides to run again in 2024.

“In Arizona, people are independent minded, much like they are in Georgia, and they pick the person that they think will be best for the responsibility,” Ducey told The Associated Press. “In Georgia, the voters said Brian Kemp, and I’m hopeful in Arizona, they’ll say Karen Taylor Robson.”

As an incumbent seeking reelection, Kemp had an advantage over his primary rival, David Perdue, and ultimately defeated him by nearly 52 percentage points. Without an incumbent on the ballot — Ducey faces term limits — the GOP contest in Arizona will likely be much closer.

But what once looked like an insurmountable lead for Lake could end in a more competitive finish. With early voting already underway, Robson is drawing on her family’s vast fortune to drown out Lake who, despite Trump’s endorsement, has lagged in fundraising. Robson had outspent Lake more than 5 to 1 as of the end of June.

The final maneuvering by some leading GOP figures could prove significant in a close race. Beyond Ducey and Christie, Robson has lined up support from former U.S. Rep. Matt Salmon, who dropped out of the governor’s race and endorsed her. The Border Patrol union, meanwhile, broke with Trump and backed Robson, citing in part Lake’s prior statements supporting a pathway to citizenship for people living in the country illegally.

Pence, who notably split with Trump in Georgia and campaigned alongside Kemp, praised Robson as “the only candidate for Governor that will keep Arizona’s border secure and streets safe, empower parents and create great schools, and promote conservative values.” Pence said he was ”proud to support her.”

For her part, Lake is an unlikely MAGA champion.

A well-known former local news anchor who donated to Barack Obama and for years hung around with drag queens at a gay bar near the television station, Lake once was the antithesis of Trump’s brand of politics.

Yet she rocketed to the top of the field since she walked away from her three-decade television career, declared “journalism is dead” and took a sledgehammer to a pile of TVs.

She built on the powerful connection she’d formed with viewers in the Phoenix media market over 27 years with the local Fox affiliate and created a uniquely strong bond with the base that propelled Trump to the White House in 2016 and still doesn’t believe he lost in 2020.

Even Trump seemed impressed by the ovation her name inspired when he mentioned it during a rally in Phoenix last year. He endorsed her a short time later.

She, in turn, has adopted his combative style, his controversial narrative about the 2020 election, and his get-tough approach to border security. She’s walked away from her close ties with John McCain’s family and now feuds with the late U.S. senator’s children.

“We’re either gonna go the way of the past, which is the McCain mafia running the show, or we’re gonna go with America first,” Lake told a crowd of hundreds at a country western bar in Tucson last week. Many arrived well over an hour early and waited in the Southern Arizona heat for a chance to get inside.

Lake, 52, routinely berates journalists trying to question her and releases the footage on social media.

Last year, she said she wants to put cameras in classrooms to monitor teachers, nodding to the backlash on the right to the far-left “woke” turn inside public schools.

If elected, she says, she’d immediately invoke an untested legal theory that illegal immigration constitutes an “invasion” of the United States and gives the governor war powers to remove people from the country without proceedings in immigration courts.

Robson, 57, is making her first run for office, though she has lifelong ties to GOP politics. Her father and brother both held elected office as Republicans.

An attorney for real estate developers, she has been at the center of the suburban sprawl that has propelled the Phoenix area’s prodigious growth. Ducey appointed her to the board overseeing Arizona’s three public universities, her most high-profile public role before she quit to run for governor.

“These are serious times,” Robson said during a recent debate. “We need a serious candidate with a record of accomplishment.”

Her husband, housing developer Ed Robson, 91, is one of the state’s richest residents, amassing a fortune building master planned retirement communities. She says the 2020 election was “unfair” but has stopped short of calling it fraudulent. Like Lake, she’s running as a border hawk.

She brands her rival “Fake Lake,” highlighting a $350 donation she gave to Obama’s 2008 campaign, though Robson has herself contributed large sums to Democrats.

“It’s all an act,” Ducey said of Lake. “The campaign she’s been running bears no resemblance to the life she’s lived for the past three decades, nor to the interactions that she’s had with me. She’s putting on a show. We’ll see how many people buy it.”