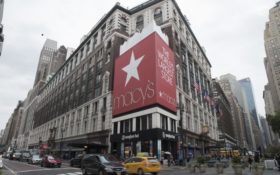 Macy’s is heading into the crucial holiday season firing on all cylinders, logging its fourth consecutive quarter of sales growth at existing locations and getting strong reactions from customers both online and in its stores.

The company also lifted its expectations for annual earnings on Wednesday.

Department stores like Macy’s are under intense pressure to reinvent themselves with so many shoppers migrating online or just spending money elsewhere, choosing to be pampered at a spa or traveling.

Fortunately, Macy’s and other retailers are doing so in the midst of a strong job market and robust economy, giving them more breathing room with shoppers feeling confident about splurging once in a while.

Macy’s, along with other stores, also have benefited from the misfortunes of others. Toys R Us and Bon-Ton have liquidated. Sears Holdings Corp., which operates Sears and Kmart stores, filed Chapter 11 bankruptcy last month. And J.C. Penney is floundering. Macy’s says it’s seeing increased business in the Midwest where Bon-Ton used to operate and it’s aggressively courting its customers.

But Macy’s focus is solidly on Macy’s. It’s been expanding its store label brands to differentiate itself from rivals. It’s also adding more of its off-price Backstage stores and putting into place technology that allows customers to skip the line at the register.

It’s rolling out multiple layers of technology to offer people something they can’t get online, such as the use of virtual reality in its furniture and cosmetics sections. The company’s revamped loyalty card program has helped keep its best customers engaged.

And it’s trying to become more nimble. Macy’s acquired Story, a concept store, which rotates themes and what it sells every few months. It brought Story founder Rachel Shechtman aboard to help create a more vibrant shopping experience at Macy’s.

And in a more radical maneuver, the company is shrinking in order to grow.

After closing more than 100 stores over the past several years, it’s going to see how cluster of smaller stores work with today’s customers.

The company released details of the new footprint to the Wall Street Journal earlier this week.

“Macy’s recipe for success is e-commerce, healthy stores and a great mobile experience that ties it all together,” Gennette said, noting that the department store will hit a billion dollars in mobile sales this year.

It’s still early, but industry watchers believe Macy’s is on the right track in this altered retail landscape.

At this time last year, 59 percent of Macy’s customers rated their shopping experience as good or very good, Saunders said, based on its research. This year that figure has risen to 67 percent, Saunders said. He wrote that his data also show that for the first time in over eight years, the number of people saying they will visit Macy’s to do holiday shopping has risen.

“Along with the good sales numbers, these pieces of evidence underline that Macy’s is succeeding in creating a stronger appeal,” he wrote.

Macy’s Inc. reported third-quarter profits of $62 million, or 20 cents per share. Per-share earnings adjusted for one-time gains and losses were 27 cents, or 13 cents better than industry analyst expected, according to a survey by Zacks Investment Research.

Sales at stores opened at least a year rose 3.3 percent, its fourth straight quarter of gains after a three-year slump. The figure included sales from its licensed departments.