“Lucky” pig saves his own bacon - The Horn News 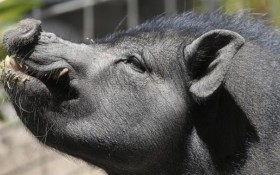 A new name and a new lease on life – A 650-pound pig that fell off a trailer in Colorado is getting a new name, “Lucky”, and a new home at a sanctuary for abandoned pigs.

The Daily Times-Call reports that Lucky rolled onto Interstate 25 on Sept. 30. He was probably destined for a slaughterhouse, but because of his daring escape will instead be headed to a cozy home east of Denver, as no one has stepped up to claim him.

The Weld County Sheriff’s Office couldn’t find the 3-year-old pig’s owner, so the boar was given to Hog Haven Farm owner and director Erin Brinkley-Burgardt.

Brinkley-Burgardt says she primarily cares for pot-bellied pigs, which people buy as pets but often abandon as they grow larger. The veterinarian who treated Lucky says he appears to be a Yorkshire pig.

Brinkley-Burgardt says Lucky can expect to live about 13 years in captivity.