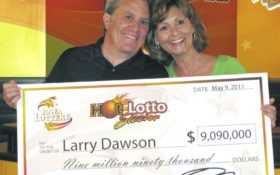 A national lottery group agreed to pay $1.5 million to settle a lawsuit filed by an Iowa man who claimed that a $9 million jackpot he won in 2011 would have been bigger if the previous one hadn’t been fixed by an insider.

An email released Friday shows that the Multi-State Lottery Association informed its directors on Oct. 9 that it had agreed to pay Larry Dawson $1.5 million as a “full and final settlement”of his claims.

The association had refused to release details of the settlement. But the Iowa Lottery, which is a member of the association, released the email in response to an open records request by The Associated Press.

The email from the association’s executive director J. Bret Toyne said that the group admitted no wrongdoing in the settlement, which was negotiated by its mediators and insurance carrier with Dawson’s lawyers. It contained a confidentiality provision.

The settlement cancelled a trial that was scheduled for this month in Des Moines.

Years later, he learned that the game’s previous $16.5 million jackpot had been rigged by Eddie Tipton, the association’s information security director, in a massive fraud. His lawsuit alleged that money should have carried over to the prize he won, and originally sought $10 million.