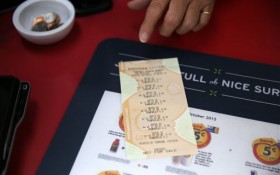 A California woman who won $5.2 million in a lottery has pleaded guilty in federal court in South Dakota to scamming six people.

The Rapid City Journal reports Judy Carroll, of El Cajon, California, and her husband won the California lottery in 1989.

Authorities say Carroll scammed people including a friend in South Dakota out of money in part by telling them the IRS had frozen her assets because she owed tax money.

She could face decades in prison. The agreement also calls for her to pay nearly $1.6 million in restitution to victims and the IRS.