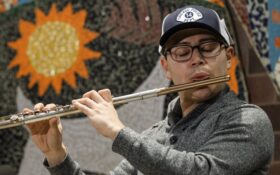 A $13,000 flute that went missing nearly a decade ago has been returned to its owner after police recovered it from a Boston music store, police said Wednesday.

The flute was reported missing in 2012 after its owner left it in a taxi cab, according to Boston police. It had been a cold case until this February, when a worker at a Boston music store called with a tip.

The worker told police that someone had come to the store with an expensive flute asking about its value. The employee took down the person’s contact information and took a photo of the flute and its serial number. The worker later realized it might be the flute that was reported missing in 2012.

Earlier this month, detectives spoke with the person who had visited the music store with the flute. The person said he had bought the instrument from an unknown person, and he turned it over to detectives, police said.

But police said they determined he was actually the driver of the taxi on that day in 2012. Police said they plan to bring a complaint against him in Boston Municipal Court.