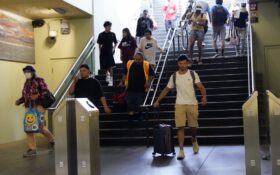 Los Angeles County dropped a plan to impose a universal indoor mask mandate this week as COVID-19 infections and rates of hospitalizations have stabilized, a top health official said Thursday.

Health director Barbara Ferrer said two weeks ago that the nation’s most populous county could again require face coverings if trends in hospital admissions continued under criteria set by the U.S. Centers for Disease Control and Prevention.

On Thursday, she said the county managed to dodge imposition of the broad mask rule. The county remains at the “high” CDC level of community transmission, but it could drop to “medium” in coming weeks.

Ferrer made the announcement during a briefing at which she displayed flat and declining data graphs. She said transmission has dropped steadily since July 23, “potentially signaling the beginning of a downward trend in cases.” Hospitalizations are also down.

“We’re on a decline right now, and it’s hard for us to imagine reinstating universal indoor masking when we’re on this significant of a decline,” Ferrer said. But she added that health officials would reassess things should case rates and hospital admissions spike again.

While masks won’t be required in most indoor spaces, Ferrer reminded residents that face coverings remain an effective tool to reduce spread.

As it has for most of the pandemic, LA County will still require masks in some indoor spaces, including health care facilities, Metro trains and buses, airports, jails and homeless shelters.

The new mandate, which would have gone into effect Friday, would have expanded the requirement to all indoor public spaces, including shared offices, manufacturing facilities, warehouses, retail stores, restaurants and bars, theaters and schools.

Nationwide, the latest COVID-19 surge is driven by the highly transmissible BA.5 variant, which now accounts for a majority of cases. It has shown a remarkable ability to get around the protection offered by vaccination.

It’s still unclear what enforcement of the health order might have looked like. Under past mandates, no individuals were cited for refusing masks, and officials favored educating people over issuing citations and fines.

“I’m hopeful that we will now be able to move on from this heightened focus on masking mandates to what really matters — focusing on promoting the efficacy of vaccines and boosters, improving access to COVID-19 treatments, and continuing to educate our County’s residents on the benefits of masking,” Barger said in a statement Thursday. “I am comfortable leaving this decision in the public’s very capable hands.”

The LA County cities of Long Beach and Pasadena have their own health departments that typically align with LA County’s rules. But not this time. Both cities said this week that they would not impose requirements for face coverings.

And the City Council of Beverly Hills voted unanimously Monday to not adopt a mask mandate imposed by the county.