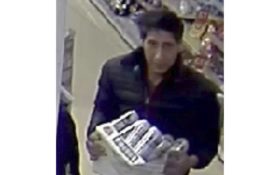 A British judge has sentenced a lookalike of “Friends” actor David Schwimmer to nine months in prison for theft and fraud.

Judge Sara Dodd sentenced Abdulah Husseni on Thursday for using a stolen bank card to make or attempt to make fraudulent purchases at four shops in Blackpool, northwest England, last year. He was convicted of one count of theft and four counts of fraud by false representation.

Husseni’s image became famous after police published surveillance-camera footage of a man carrying a carton of cans from a restaurant in Blackpool. Social media users noted a strong similarity to Schwimmer’s character Ross Geller in the TV show.

The actor then posted a video on Twitter showing him scuttling furtively through a U.S. convenience store clutching a carton of beer. Schwimmer wrote: “Officers, I swear it wasn’t me.”