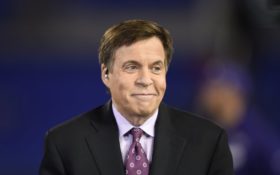 Bob Costas, who stepped down as NBC’s prime-time Olympics host two years ago, has left the network’s sports division altogether.

“Everything in this transition was planned and done (by) mutual agreement,” Montag said in an emailed statement. He said Costas had a “great partnership” with executives including Dick Ebersol and Mark Lazarus, the current NBC Broadcasting & Sports chairman.

Costas, 66, served as the emcee for NBC’s Olympics 11 times starting in 1992. In early 2017, he stepped aside for network newcomer Mike Tirico, formerly with ESPN.

When the switch was announced in early 2017, Costas said he had decided on his own that the time was right for a change. He said then he wanted to do long-form programming and commentary on special events, likening his new role to what former NBC news anchor Tom Brokaw does for the network.

On Tuesday, Costas told the New York Post of his decision to leave NBC Sports, saying his departure was settled “quietly and happily for all concerned.”

In August 2018, the paper reported that he was no longer satisfied with his role at NBC and a contract that limited his participation in other projects.

Costas, who joined NBC Sports in 1979, has covered baseball, football and basketball and horse racing as well as served as the face and voice of the Olympics.

He plans to continue working on the MLB Network and is interested in doing an interview show focusing on sports and news, the Post said.

“In addition to MLB Network, Bob certainly has a next chapter in his career and we look forward to developing those possibilities,” Montag said.