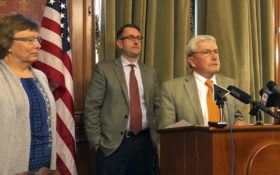 The longest serving Republican in the Iowa Legislature announced Tuesday that he’s becoming a Democrat, saying he didn’t want to remain in a party led by President Donald Trump.

Rep. Andy McKean said he made his choice after returning to the Legislature after years away from politics and finding the GOP had changed. Another significant factor, he said, was the presidency of the Republican Trump. He said if the president’s behavior and leadership is the new normal, “I want no part of it.”

“Unacceptable behavior should be called out for what it is and Americans of all parties should insist on something far better in the leader of their country and the free world,” said McKean, 69, a retired attorney from the eastern Iowa city of Anamosa.

He pointed to Trump’s spending decisions, and what McKean called the president’s “erratic, destabilizing foreign policy,” choices regarding the environment and “disregard for the truth.”

Sponsored: Warning: Don’t swallow one more milligram of THIS drug

McKean first entered the House in 1979 and served seven terms. He left the legislature but returned to the Senate in 1993 and served three terms. He then won election to the House in 2016 and was re-elected in 2018. He’s now served nearly 29 years in the Legislature.

When he returned, McKean found he disagreed with Republicans on many high profile issues, though he declined to provide specifics.

“I found myself increasingly uncomfortable with the stance of my party on the vast majority of high profile issues and often sympathetic with concerns raised by the minority caucus,” said McKean, who described himself as a moderate.

McKean said he’ll register as a Democrat when he returns home later this week and plans to seek re-election as a Democrat in 2020.

It’s rare for Iowa legislators to change parties, with such a change last happening in the House in 2007, when Rep. Dawn Pettengill, of Mount Auburn switched from Democrat to Republican a day after the session ended.

Iowa Democratic Party Chairman Troy Price welcomed McKean to the party, saying “His decision to put people over politics shows his commitment to our state.”

Democrats have a slight advantage among registered voters in McKean’s district, but non-affiliated voters outnumber those in each of the parties. Republicans have held the district in recent elections.

McKean’s decision leaves Republicans with a 53 to 47 majority in the House, and Speaker Linda Upmeyer said his move won’t change the chamber’s action as it works toward adjournment in the coming weeks.

“I respect Rep. McKean’s decision and wish him the best,” Upmeyer said. “This will not distract us from moving forward with the conservative agenda that Iowans have tasked us with. As a majority of 53 strong Republicans, we are committed to completing our work and wrapping up the session.”