Lizzie Borden’s infamous house up for sale - The Horn News 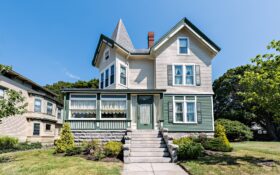 A home where Lizzie Borden lived in Fall River, Massachusetts, is on the market again, after being sold most recently in 2018.

The current owners, Donald Woods and Leeann Wilber, also operate a Borden-themed museum and bed-and-breakfast at a different home where Borden was famously accused of killing her father and stepmother with an ax in 1892, The Herald News reported.

Borden was acquitted and moved into a home at 306 French St. in Fall River in 1893 with her sister, the newspaper reported. The killings were never officially solved.

Woods and Wilber installed a sprinkler system in the French Street home, which Borden called Maplecroft, when they purchased it for $500,000. They intended to convert it into another destination for tourists interested in Borden’s story, the newspaper reported.

But when the town asked for additional renovations and placed other conditions on the proposed business, they decided to abandon the venture, an employee of Woods and Wilber’s told the newspaper.

The seven-bedroom home is being sold fully furnished and the asking price is $890,000, the newspaper reported.