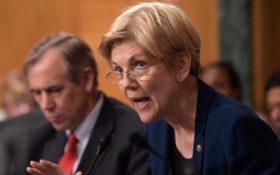 What she got was an earful.

The Biden administration’s new proposals include new rules intended to discourage companies from doing stock buybacks. The proposed rule change would tax all stock buybacks at one percent while preventing executives from participating in stock buybacks — and also create a blackout window for them to sell their stock for upwards of four years after a buyback.

“Part of the problem is that we’ve set up the incentives so that executives are paid in stock,” Quick told Warren, who tried to laugh it off. “We wanted them to be aligned with the shareholders to begin with.”

“What if this [tax hike] has the unintended consequence” where companies stop paying top executives in “stocks as much because it’s too onerous … for them to get paid.”

Quick warned that the new proposal threatened to undermine the 2002 Sarbanes-Oxley Act, which encouraged companies to pay their executives with stock so that those executives would have the same interests as the company’s small stockholders.

“That puts us back at the point we were trying to prevent with Sarbanes-Oxley [Act]. Which is, we wanted them aligned with shareholders. We wanted them to have more stock compensation.”

“So, you’re talking about seven years after they’d gotten done the work for the year, they’d be paid for it. That just seems like an awfully long lead time.”

You can watch it below —

Republicans noted that deficits well over $1 trillion annually would persist, said higher taxes could hurt growth, and warned that additional government spending would feed into inflation.

“What this budget shows is that President Biden values more spending, more debt, more taxes, and more pain for the American people,” said Rep. Jason Smith of Missouri, the top Republican on the House Budget Committee.

Senate Minority Leader Mitch McConnell, R-Ky., said the president’s defense proposal would at best “leave our armed forces simply treading water” because of inflation. He said bigger budgets for agencies like the IRS and the Environmental Protection Agency were “bloated liberal nonsense.” And he labeled Biden’s $2.5 trillion, 10-year tax boosts, which the president said would only affect the nation’s highest earners, a “bomb of tax hikes.”