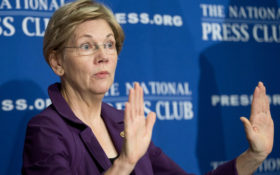 Sen. Elizabeth Warren, D-M.A., poll numbers had been on an upswing since the Democratic debates — until she fell right into a trap door this week!

Her latest political flub could end her primary run before it even begins.

Warren — following the liberal handbook of “go-to” moves — announced to a couple of young hopefuls that it was time to end Israeli “occupation” of Palestine and give the land back.

The exchange began when two anti-Israel activists rushed up to Warren and said, “Hi, we are American Jews and we really love the way that you are fighting corruption and we would really love it if you also push the Israeli government to end the occupation.”

Warren may soon regret that comment — to imply the end of the so-called “occupation” of the Holy Land is to imply the eradication of the Jewish community that lives there.

It’s a common rally cry that connects a number of radical Islamic terrorists, the Palestine Liberation Organization, and pro-Palestine group B.D.S. (Boycott, Divestment and Sanctions Movement) — all of whom say that the end of the “occupation” can only come from destroying the Israeli state.

It could cause Warren serious trouble inside establishment Jewish communities — a staple demographic of Democratic voters in Florida.

Republicans are hard at work to appeal to Jewish voters who feel that the Democratic party has been steered too far left, with no hope of it getting back on track.

If Warren ends up winning the Democratic presidential primary, states with large Jewish populations like Pennsylvania and Florida — which Trump turned red in 2016 — could easily stay Republican.

Knowing that she’s unelectable, Democratic voters will steer clear of Warren — and that could end her campaign before the summer is done.