Liz Cheney to switch to Democratic Party after this?! - The Horn News 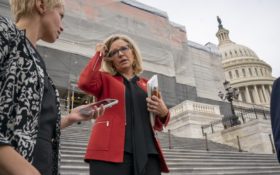 Rep. Liz Cheney, R-Wyo., has spent much of her life as the face of the GOP… but lately she’s faced speculation that she is switching parties.

Cheney gave an unexpected interview with The New York Times this month where she said it was her preference to work with certain Democrats over certain Republicans.

“I would much rather serve with Mikie Sherrill and Chrissy Houlahan and Elissa Slotkin than Marjorie Taylor Greene and Lauren Boebert, even though on substance certainly I have big disagreements with the Democratic women I just mentioned,” Cheney told Times in an interview published Sunday.

Ahead of her Aug. 16 primary, Cheney has reportedly been pocking money from big Democratic donors, like Jeffrey Katzenberg of the Walt Disney Company.

Plus, Cheney is no longer recognized as a Republican by the Wyoming chapter of the GOP. If she tries running for president in 2024, she could face obstacles to filing as a Republican.

Cheney has long denied a desire to join the Democratic Party. She told the Times, “I’m a Republican.” In another interview in January, the congresswoman described herself as a “conservative Republican,” and she devoted much of the interview to slamming President Joe Biden for his record on China, inflation, and national security.

Cheney said she is open to voting Republican in the next presidential election. She also expressed agreement with Trump’s policy proposals, just not with his efforts to contest the 2020 election.

“[The GOP] is continuing to drive itself in a ditch and I think it’s going to take several cycles if it can be healed,” Cheney said.

“I think that Ron DeSantis has lined himself up almost entirely with Donald Trump, and I think that’s very dangerous,” Cheney told the paper.

Some Republicans agree with Cheney on some issues but question her priorities.

“It depends on if you want to go out in a blaze of glory and be ineffective or if you want to try to be effective,” Sen. John Cornyn, R-Texas, told the Times. “I respect her but I wouldn’t have made the same choice.”

“Her voting record is not bad,” one Wyoming resident told the paper. “But so much of her focus is on Jan 6.”

DeSantis is not one of those Republicans. He blasted Cheney during a February interview with Fox News. “She’s not really a Republican in terms of what she’s doing,” DeSantis said.