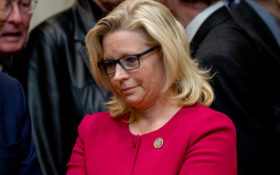 Wyoming Rep. Liz Cheney, who was ousted from office in a landslide primary loss, said on Sunday that she was open to joining Democratic Party allies against former President Donald Trump loyalists.

After soundly losing her re-election primary to a challenger backed by Trump, Cheney went on ABC News “This Week” to share her future plans — and said she will support Democratic candidates against some of her former Republican allies.

Specifically, Cheney said she will target any Republican who denies the 2020 election results.

“I’m going to be very focused on working to ensure that we do everything we can to not elect election deniers,” Cheney said in the interview.

“We’ve got election deniers that have been nominated for really important positions all across the country,” she said. “I’m going to work against those people. I’m going to work to support their opponents.”

After her primary defeat, GOP Rep. Liz Cheney tells @jonkarl that she will focus on working to keep election deniers out of office.

“I’m going to work against those people, I'm going to work to support their opponents. I think it matters that much.” https://t.co/ztgdHLNV99 pic.twitter.com/cHDGCmvihJ

The congresswoman had previously called Trump “a very grave threat and risk to our republic,” and said defeating him will require “a broad and united front of Republicans, Democrats and independents — and that’s what I intend to be part of.”

She has hinted that a 2024 presidential run meant to siphon conservative votes from Trump is “something that I’m thinking about.”

The primary results — and the more than 35-point margin of her defeat — were a powerful reminder of the GOP’s rapid shift to the right. A party once dominated by national security-oriented, business-friendly conservatives like her father, former Vice President Dick Cheney, now belongs to Trump, animated by his populist appeal and, above all, his unsuccessful attempts to relitigate the 2020 election.

Cheney transformed from an occasional critic of the former president to the clearest voice inside the GOP warning that he represents a threat to democratic norms.

“I have said since Jan. 6 that I will do whatever it takes to ensure Donald Trump is never again anywhere near the Oval Office — and I mean it,” she said during her concession speech after her primary loss.

Cheney described her defeat as the beginning of a new chapter in her political career as she addressed a small collection of supporters, including her father, on the edge of a vast field flanked by mountains and bales of hay.

“Our work is far from over,” she said, evoking Abraham Lincoln, who also lost congressional elections before ascending to the presidency and preserving the union.

Trump and his team celebrated Cheney’s loss, which may represent his biggest political victory in a primary season full of them. The former president called the results “a complete rebuke” of the Jan. 6 committee.

“Liz Cheney should be ashamed of herself, the way she acted, and her spiteful, sanctimonious words and actions towards others,” he wrote on his social media platform. “Now she can finally disappear into the depths of political oblivion where, I am sure, she will be much happier than she is right now. Thank you WYOMING!”

With Cheney’s loss, Republicans who voted to impeach Trump are going extinct.

In all, seven Republican senators and 10 Republican House members backed Trump’s impeachment in the days after his supporters stormed the U.S. Capitol as Congress tried to certify President Joe Biden’s victory. Just two of those 10 House members have won their primaries this year. After two Senate retirements, Murkowski is the only such Senate Republican on this year’s ballot.