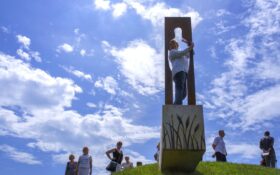 J.D. Salinger, the American writer best known for his 1951 novel “The Catcher in the Rye,” was honored Friday with a sculpture featuring a rye field near the Lithuanian village where his ancestors lived.

The writer, whose book was popular among the post-World War II generation of college students in the United States but also was banned for decades there, joined other another figure with a statue there: singer Leonard Cohen, whose mother was born in Lithuania.

The history of the Salinger family goes back to Sudargas, a small Jewish settlement on the Lithuanian-Polish border in what was then the Russian Empire. Village records show that the Salingers had lived in Sudargas at least since 1831 after the writer’s great-grandfather, Hyman Joseph Salinger, moved there from the nearby town of Taurage. The village still exists but the Jewish settlement does not.

His grandson emigrated to the United States in 1881, during famine and married a Lithuanian immigrant in Pennsylvania. Jerome David Salinger was born in Manhattan, New York, in 1919.

When his novel, depicting loss of innocence, was published, it became an immediate success in the Western world.

But at that time, Lithuania was occupied by the Soviet Union. Life during the Soviet-era was dominated by staged images of happiness and success, and was contrasted to grim images of capitalism with wars, strikes, homeless people and unemployed workers, among others.

“We did not have rock ’n’ roll, freedom or other things that young Americans enjoyed,” said Rolandas Skaisgirys, one of those behind the statue initiative.

The sculpture is of a human silhouette cut out in a steel plate that is bent before a void. The metal plate is attached to a concrete block that carries the name J.D. Salinger above a rye field printed on the side of the block that is sticking out from a hill surrounded by a forest.