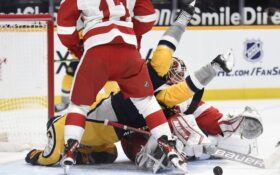 Tim Peel’s career as an NHL referee is over after his voice was picked up by a TV microphone saying he wanted to call a penalty against the Nashville Predators.

The league on Wednesday announced that Peel “no longer will be working NHL games now or in the future.” The 54-year-old Peel had already made plans to retire next month.

“Tim Peel’s conduct is in direct contraction to the adherence to that cornerstone principle that we demand from our officials and that of our fans, players coaches and all those associated with our game expect and deserve,” NHL vice president of hockey operations Colin Campbell said in a statement. “There is no justification for his comments no matter the context or intension.”

The NHL determined it was Peel’s voice that was heard on the TV broadcast of the Predators home game against the Detroit Red Wings after Nashville forward Viktor Arvidsson was issued a minor tripping penalty five minutes into the second period.

“It wasn’t much, but I wanted to get a (expletive) penalty against Nashville early in the,” the unidentified official was heard saying before the microphone was cut. Peel worked the game with referee Kelly Sutherland.

The Predators won 2-0 and were called for four penalties, compared with the Red Wings’ three.

Predators coach John Hynes said after the game that it didn’t matter how he felt about what the official said. “But the referees are employees of the league and rather than me comment on it, it’s an issue that I think the league will have to take care of,” Hynes said.

He said his team, now 5-3-1 over its past nine games, has been working to avoid excuses after going through a 16-day road trip that was the longest in franchise history. Hynes has been pushing his players to control what they can.

“You’re not so much worried about what’s going on in those situations as we’ve got to be able to kill the penalty, we’ve got to be ready to play, and that’s what I really liked about our team’s reaction to that situation,” Hynes said.