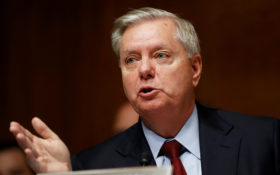 Senator Lindsey Graham is following President Donald Trump’s lead and has announced that he has plans to introduce legislation to put an end to “birthright” citizenship.

In a series of tweets on Tuesday, Graham praised Trump for his willingness to “take on this absurd policy” and promised to propose a bill along the same lines “as the proposed executive order” from Trump.

The Hill reports that Graham could introduce the piece of legislation as soon as Congress returns from their October recess on Nov. 13.

Following Fox News’ announcement that the president said he had plans to sign an executive order ending the “birthright” citizenship, Graham tweeted, “Finally, a president willing to take on this absurd policy of birthright citizenship.”

He continued, “I’ve always supported comprehensive immigration reform – and at the same time – the elimination of birthright citizenship.”

The South Carolina senator added, “In addition, I plan to introduce legislation along the same lines as the proposed executive order from President.”

Graham concluded that he “will be introducing legislation to deal with the issue of birthright citizenship for children of illegal immigrants — in a prospective manner — as I have always contended it has become a magnet for illegal immigration in modern times.”

I will be introducing legislation to deal with the issue of birthright citizenship for children of illegal immigrants — in a prospective manner — as I have always contended it has become a magnet for illegal immigration in modern times.

The senator plans to center his bill around Trump’s proposed order which would put an end to a loophole that allows for “birthright tourism” — which sees many visitors come from other countries for the purpose of delivering their baby on American soil.

If Graham wants his bill to pass, he will need to “win over not only two-thirds majorities in Congress, but also be ratified by three-quarters of the states,” The Hill reports.

The DailyWire reports that Graham would most likely not be making any changes to the Constitution, but rather, would “define the terms and conditions of obtaining “birthright” citizenship.”

At an event on Tuesday, Vice President Mike Pence appeared to echo Trump’s proposed order by stating, “The Supreme Court of the United States has never ruled on whether or not the language of the 14th Amendment subject to the jurisdiction thereof applies specifically to people who are in the country illegally.”

Do you agree with Graham, Trump, and Pence?

Share your opinions below if you want Graham to introduce legislation —