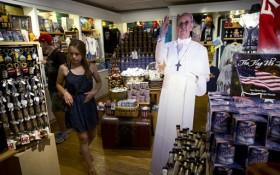 PHILADELPHIA (AP) — Pope Francis isn’t scheduled to touch down in the U.S. until September, but he’s already popped up at a Philadelphia Phillies game and at the Battleship New Jersey.

Cardboard cutouts of the pontiff have been appearing all over the Philadelphia region, generating buzz around his upcoming trip.

Kathy McDade posed with the faux Francis near Independence Hall so she could brag to her family about spotting the famous figure.

“I thought let me take a picture and post it on my Facebook page, and show them all that I met the pope in person,” McDade said, laughing.

Pope Francis plans to visit Philadelphia Sept. 26-27 for the World Meeting of Families, a Catholic conference designed to bring families closer together.

Nancy Caramanico, digital content manager for the World Meeting of Families, said bringing the cutout to various sites on “Philly Francis Fridays” has proved popular with both Catholics and non-Catholics.

“Pope Francis is described as the people’s pope. So we have him in places where many people can see him,” Caramanico said. “People are just really excited to be around him and are anticipating his visit to Philadelphia.”

The staff encourages people to post their pictures on social media using the hashtags #PopeinPhilly or #WMF2015.

Jennifer D’Angelo, who struck a pose with the paper pontiff at The Bourse food court near Independence Hall, will be at college in Pittsburgh when the pope visits.

“It seems like he’s trying to bring the Catholic Church together,” D’Angelo, 19, said. “I think he’s doing a great job. I’m just kind of sad that I’m not going to be in the city when he comes.”

“We get a lot of smiles and waves,” said Tanner, who teaches religion at a local Catholic school. “Some people just ignore us completely, while others are just drawn to the image itself, and they have to come over and touch it.”

Scalies said she hopes the cutout spreads a message of which the pope would approve.

“Essentially, let’s all be a little kinder and nicer to each other,” said Scalies. “We’re all in the same world.”