Liberals STUNNED by revealing truth on refugees - The Horn News 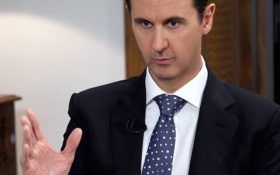 There’s an alarming truth about President Donald Trump’s travel ban that the mainstream media is afraid to talk about — there are bloodthirsty killers hiding among refugees.

And there’s more terrorists coming. That’s according to Syrian President Bashar al Assad, a bloodthirsty killer himself, who told Yahoo News there were “definitely” terrorists hiding among the refugees heading to the United States.

“Those terrorists in Syria, holding the machine gun or killing people, they [re-appear as] peaceful refugees in Europe or in the West.”

Assad should know. He has spent years fighting the Islamic State for control of his country, and their bloody civil war is what caused the refugee crisis in the first place.

He wouldn’t estimate the ratio of terrorist-to-peaceful migrants among those fleeing his country’s war zone, but he pointed out “you don’t need a significant number to commit atrocities.”

“Out of maybe millions of immigrants in the United States,” Assad said, the 9/11 attacks were pulled off by fewer than 20 terrorists.

It’s an uncomfortable truth, because the majority of refugees are honest, peaceful people.

But the bad guys are using these peaceful refugees as camouflage, and their end goal is unspeakable violence.

The longer the media ignores this, the more American blood will be spilled by jihadist killers.

Special Report: Refugee terror in U.S. the dishonest media REFUSES to report on