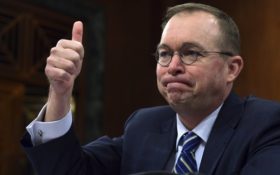 The Trump administration is pushing what it calls a “bold new approach to nutrition assistance”: replacing the traditional cash-on-a-card that food stamp recipients currently get with a pre-assembled box of canned foods and other shelf-stable goods dubbed “America’s Harvest Box.”

Office of Management and Budget Director Mick Mulvaney likened the box to a meal kit delivery service, and said the plan could save nearly $130 billion over 10 years. But the idea, tucked into President Donald Trump’s 2019 budget, has caused a firestorm, prompting scathing criticism from Democrats and nutrition experts who say its primary purpose is to punish the poor.

“The main goal is to alleviate food insecurity, and the reason SNAP is so successful is because it gives low-income families the autonomy and dignity to make their own food choices,” said Craig Gundersen, a professor in agricultural strategy at the Department of Agricultural and Consumer Economics at the University of Illinois at Urbana-Champaign. Gundersen said people will leave the program as a result of the shift.

SNAP — the Supplemental Nutrition Assistance Program — is the official name for the food stamp programs.

“All of a sudden you’re saying, ‘we don’t trust you to make the right decisions for your family.’ It’s demeaning and it’s patronizing. This is pro-hunger, because people will leave the program,” Gunderson said.

Under the proposed plan, households that receive more than $90 in SNAP benefits each month — roughly 81 percent of households in the program, or about 16.4 million — would be affected.

Agriculture Secretary Sonny Perdue called the box “a bold, innovative approach to providing nutritious food to people who need assistance feeding themselves and their families.”

But the proposal doesn’t include any concrete details about how much the program would cost or how it would be implemented, saying only that states will be given flexibility to distribute the boxes “through existing infrastructure, partnership, and/or directly to residences through commercial and/or retail delivery services.”

Lawmakers say they aren’t even sure where the idea came from.

Rep. Jim McGovern, D-Mass., the ranking member of the House nutrition subcommittee, called the proposal a “cruel joke” that came out of nowhere. He said despite having numerous hearings on SNAP, Monday’s budget was the first time he’d heard of the food box proposal.

“I don’t even know how to implement it. Who would distribute these boxes?” he said. “How would we do this? Do they anticipate recipients getting them at supermarkets? In addition to being a cruel and demeaning and awful idea, it’s just not practical.”

A spokeswoman for House agriculture committee Chairman Mike Conaway, R-Texas, said the committee has held 21 hearings and invited 80 experts to speak about SNAP in its preparations of the forthcoming farm bill, and the idea of a food box was not once discussed.

An Agriculture Department spokesman said the idea was developed internally, but didn’t provide further details on the brainstorming process. Mulvaney credited it to Perdue.

Michigan Sen. Debbie Stabenow, top Democrat on the Senate agriculture committee, said the food box idea “isn’t a serious proposal and is clearly meant to be a distraction from this Administration’s proposed budget that fails our families and farmers.”

The proposal is part of a broader plan to gut the SNAP program, reducing it by roughly $213 billion — nearly 30 percent — over the next decade. The plan also proposes tightening work requirements for recipients.

Matt Knott, president of hunger relief network Feeding America, called it “an unworkable solution in search of a problem.”