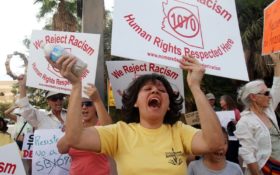 After Arizona passed a law that required local police to check the immigration status of people suspected to be in the country illegally, the state’s second-largest city wanted to send a message.

The Democrats who control Tucson designated their town an “immigrant welcoming city” in 2012, and the police department adopted rules limiting when officers can ask about the immigration status of suspected illegals they encounter.

But on Tuesday, given the chance to push the envelope further, the heavily Democratic city voted overwhelmingly not to become an official “sanctuary city” with more restrictions on how and when police officers can enforce illegal immigration laws.

The incongruous result followed a contentious disagreement that divided progressives between those eager to protect illegal immigrants and speak out against President Donald Trump, and those who said the initiative would bring nothing more than unintended consequences.

“The city of Tucson, in all respects except being labeled as such, operates as a sanctuary city,” Mayor Jonathan Rothschild said in an interview before the vote.

The sanctuary initiative, he argued, would have tied the hands of police even on matters unrelated to illegal immigration while inviting expensive retaliation from the Trump administration and Republicans in the state Legislature.

Tucson is widely credited as the birthplace of the Sanctuary Movement in the 1980s, an effort by churches to help illegal immigrants from Central America and shield them from deportation.

The ballot measure was pushed by liberal activists who wanted to give a voice to Tucson’s Latino community. They said it would have sent the message that illegal immigrants are safe and protected in Tucson at a time when many are fearful of Trump’s immigration policies.

“We have been failed by the city government here,” Zaira Livier, executive director of the People’s Defense Initiative, which organized the initiative, told supporters following the vote, according to KOLD-TV.

Tucson politicians say they stand with illegal immigrants, but when the going gets tough, they back down, she said.

“We are here to test you and to tell you that the bare minimum is no longer good enough and we expect better,” Livier said.

The initiative explicitly aimed to neuter a 2010 Arizona immigration law known as SB1070, which drew mass protests and a boycott of the state. Courts threw out much of the law but upheld the requirement for officers to check immigration papers when they suspect someone is in the country illegally.

A handful of Republican state lawmakers have said they would pursue legislation to punish Tucson. Prior legislation approved by the GOP Legislature to tie the hands of liberal cities, including Tucson, allows the state to cut off funding for cities that pass laws conflicting with Arizona laws.

Meanwhile, Tucson voters elected their first Latina mayor. Regina Romero will be the first woman to lead Arizona’s second-largest city after Phoenix, with a population of about 546,000 people.

Tucson’s last Hispanic mayor was Estevan Ochoa, who was elected in 1875 — nearly four decades before Arizona became a state and just 21 years after the United States bought Southern Arizona, including Tucson, from Mexico in the Gadsden Purchase.

Romero, who is on the city council, opposed the sanctuary city initiative, saying it’s unnecessary given Tucson’s welcoming attitude and policies toward immigrants.

“I am so proud and so humbled for tonight,” she said in a victory speech.

Thanking her family, she added, “No single person can make history on their own.”