Liberals demand THIS Christmas tradition be cancelled - The Horn News 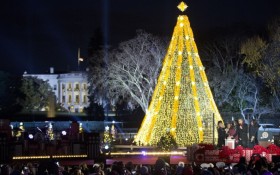 Just call her the Grinch who stole your Christmas party!

A liberal New York Times columnist is suggesting that offices everywhere CANCEL their holiday fun, claiming women feel too uncomfortable at these parties.

“Why are we having holiday parties at all?” Jennifer Weiner complained on CBS News’ “This Morning.”

You have to wonder who died and appointed her the Queen of All Women in the Workplace!

She wrote an entire column – more than 1,000 words – griping about the struggles women face in choosing how to dress for a holiday party.

But she took it even further during her CBS appearance when she tried to pull the plug on all holiday parties.

“Wouldn’t you rather have an extra hundred dollars in your paycheck than have to go, put on the Spanx, put on the heels, be social with the guy with the stale coffee breath who’s been kinda looking at your backside every time you go to the copier?” she said.

This crack about the backside wasn’t just a one-shot dumb joke, either.

Later in the segment, when offering “tips” for women at office parties, she brought up the hypothetical backside-checker again.

“Have a friend, have a plan, like if that guy who checks out your butt as you go to the copier corners you, have a friend who is gonna be, like, looking out for you,” she said.

Then, she took it even further with an off-color “joke” using the name of Supreme Court Justice Brett Kavanaugh’s accuser.

When talking about what women could wear to such parties, she said:

“I joke that like, unfortunately, if I was telling somebody what to wear, I’d say a body camera at this point! A body camera and the Christine Blasey Ford memorial one-piece bathing suit under the clothes. Which is terrible, but here we are.”

Imagine if a conservative had used Prof. Ford’s name in a “joke” like that to score cheap points.

They’d be FIRED in less than a day!

Unfortunately, her overall point appears to be winning out in the PC era and not because office workers – men and women alike – don’t want parties.

It’s the one day of the year they can forget about work and have a little fun with their colleagues.

But the ugly hand of political correctness has employers downright terrified.

Consulting firm Challenger, Gray & Christmas, Inc., which has been tracking office parties for years, says 2018 is shaping up to be the bleakest yet when it comes to the festive events.

Only 65 percent of companies are holding parties, the lowest number since 2009, when only 62 percent held the events.

That was at the height of the Great Recession.

Today, we’re in a booming economy.

“The low number of corporate celebrations does not appear to be due to economic reasons. Companies are sitting on tax savings and generally report a thriving economy,” said Andrew Challenger. “We have never seen so many companies report that they never have holiday parties. The number could be due to several factors, including potential liability following the #MeToo movement.”

Indeed, 60 percent of the companies surveyed said they had “real concerns” about inappropriate behavior at parties.

There’s no doubt that the #MeToo movement has helped women in the workplace and exposed serial abusers like Harvey Weinstein and Les Moonves.

Sounds a little more like the leftist agenda at work again, first replacing the word “Christmas” with the more generic “holiday” and now doing away with it altogether.

In that context, Weiner’s column and media blitz seems to fit right in.